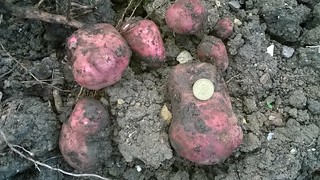 I’ve pretty much given up on the allotment now, all I’m doing is watering my leeks and waiting for autumn when I will dig it all properly and manure it heavily. I still want the plot because I have put in a massive amount of energy into it and I just don’t like giving up, but I screwed up really badly this year. I can’t believe I have spent so much time nurturing such things as artichokes to see them whither, but it is a lesson that needs learning: the land needs proper stewardship and I just wasn’t doing it.

It’s not all a total disaster though. I dug up the biggest potato plant in the row and I got a couple of bakers – yea! 800 grams (over 1.5 lbs) from one plant. This might not seem much but the land last year was bind weed and brambles and the only fertiliser I used was to lay comfrey leaves and fresh grass trimmings at the bottom of a trench. Two months ago I laid some more comfrey leaves (minus stalks) on top of the soil around the potato haulms and sporadically, but thoroughly, watered it. No compost, manure, fertiliser, urine, green manures – nothing. This technique was invented, and scientifically tested, by Lawrence D Hills and is written about in his book ‘Grow Your Own Fruit and Vegetables’. 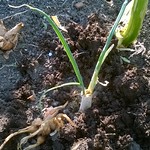 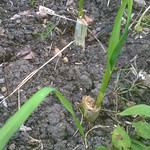 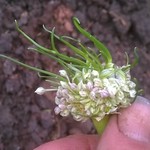 Also on the plot, my experiments with vegetatively propagating leeks are coming along. This May last year’s king pods bolted. A third I let flower (to save seed or collect pips if they appear), a third I nipped the flowers off but let the plant stand and the last third I cut low to the ground. Well, the ones I cut close to the ground about half kept trying to flower which I kept nipping off and then eventually all started growing again as either one or two new leeks. The third with the flowers nipped off formed two large bulbs which came up to the surface of the soil and are now trying to sprout into new leeks. The last third are simply flowering but some have formed grass (pips). These I removed, taking the whole flower head and dividing into four, pressing each quarter into compost in modules. They have already (a mere week or two) put on roots and a couple more weeks and I will divide each plant out and plant. I have to be quick because summer is moving on and next May they will bolt. I may plant them close together as mini leeks.

The back garden is still on track. I have bought in some compost (and blood fish and bone) but this was only to start off some new large pots. In the rest of the garden I have stuck to my policy of using only my own homemade compost and somehow, despite the challenges, it is still working. To prove it though, I need a really good crop of squashes which is my bulky, storable, winter crop. If it is a bad crop then I will need to import some manure, if it isn’t I shall be celebrating the first year of my “closed loop” garden.

I have learnt a lot about compost, mainly by watching the effects of the shop bought stuff on seedlings. Clearly the stuff isn’t fully composted because plants often remain yellow and only feeding gets them past this stage. Then after a month or two the compost looks less woody and the plants put on a burst of growth. We didn’t get this from the peat based compost! But the same thing can happen with my own compost because I want to use it quickly and therefore i use it as soon as it looks brown and crumbly. A couple of rains later and the compost on the soil looks woody. It does work to feed the plants, that’s clear, but it works slowly.