As reported previously I have put a lot of effort into reproducing my plants without using seeds. Seeds are uncertain, tricky and prone to being wiped out by slugs and damping off. They also cost money and time. With such things as broccoli and kale I can simply pull off a sprout from the main stalk and bung it in some compost. Cabbages don’t have sprouts like this but will grow sprouts if you cut the main head off. This is well known as a technique to get a second harvest but not as a means of taking cuttings.

I am assured that this works by trustworthy sources but as usual I need to find out for myself. The pic to the left shows what these sprouts look like (they appear about two weeks after cutting the main head). They are quite small.

One oddity is this cabbage which grew sprouts from the roots. I have of course ripped these off and potted them up.

Six weeks later and there has been much improvement in my cuttings. I have done some repotting and moving about and I think 100% of my cuttings have taken. Some are small and caterpillar-eaten and therefore too delicate to lift out and inspect, they do however show signs of green growth. The bigger sprouts are starting to shoot off into new growth and some I have potted on and indeed have roots. The growth found on the roots of one of last year’s cabbages (see pic to left) did best of all and shot up in size. They are both now in the ground. I am playing with the idea that if I rock the mature plants from side to side and disturb their foundations they may be encouraged to put out these vigorous shoots. 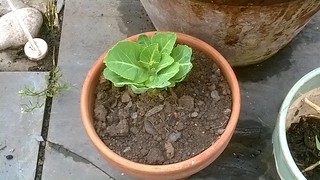 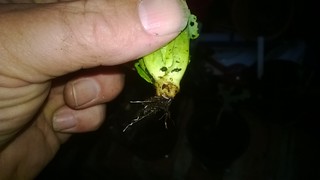 I have already posted these photos but I am adding them here to make one complete article on how to take cuttings from cabbages. It should provide evidence that it is possible and even easy. The only possible fly in the ointment I can envision is if the plants quickly bolt (I want cabbage heads), but if they do I will let you know.

This is a technique that I am keen on trying to keep some special cabbages going. Thanks for reminding me.

Thanks for commenting. I am still experimenting and next years crop will be the proof of the pudding – but it is very interesting how these plants do set roots from cuttings.

[…] cabbage cuttings, see previous post, have being doing well. After some of them started to bolt, and having nipped them off quickly, […]