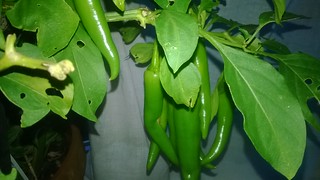 That’s it, it is too cold and time for my annual attempt to overwinter tender plants. I should of course give up such a mad endeavour and accept the british climate is what it is and tender plants are what they are. But hope springs eternal and the winter is not that long, is it? It has not all been total failure, two years ago I succeeded in overwintering three chili plants (thus proving it wasn’t a fluke) which cropped well again the next year but succumbed to the next winter. It was gutting.

Chilis do seem to hold out the most hope for regular overwintering of exotic veg plants. I have two chili plants, one of which has cropped really well but I would like to keep both alive over the winter. I ought to add that I don’t apply heat, I can barely afford to heat the human beings in the house let alone plants, so the poor garden refugees need to make do with a window sill in a draught free area. We don’t use the central heating all that often, we are too poor, so shelter and a little winter daylight is all the plants can expect. Tall order you might think but as I said I have succeeded with chilis.

One plant I most definitely haven’t succeeded with is the African Blue Basil. Unlike its normal green cousin, African Blue is a perennial and not an annual and there is much anecdotal evidence that the plants can be overwintered, in Britain, on a warm window sill. It is also a very pretty plant. We know it is perennial because its stems are always woody, well when I buy them anyway, and I have to buy them often because they always die in autumn. I know they can be saved, I just haven’t succeeded yet. This year I have taken cuttings as an insurance policy but I still hope to save the shrubby mother plant. What got last years plant was red spider mite so I’m going to get the organic sprays ready. I wont use the spray outside but inside I mean business. Other techniques I plan on using is fleecing up the plants (indoors) hoping the extra warmth will do the trick, perhaps with a glass cloche as well.

In two of his books Geoff Hamilton says the aubergine is a perennial and can be grown as such. Of course I have failed at this in the past but my attempts were half hearted. The last time I was defeated, again, by red spider mite. I never get a good crop of aubergines but this year I had 5 or 6 little ones from one plant and they were very tasty. It is an attractive plant that I really like looking at with its attractive oak leaf shaped leaves, bushiness and pretty purple, potato-like, flowers.