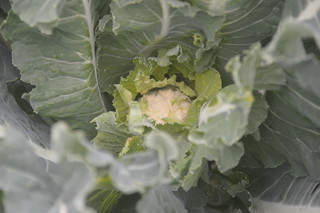 Nine Star Broccoli seems a bit misnamed. Though the plant looks like a purple sprouting broccoli by its tall stalk and green leaves, its spears (or what I call curds) look and taste like cauliflower. So because its edible (as opposed to inedible) parts are cauli like I tend to refer to it as a type of cauli. Unlike the cauli though (but like the broccoli) it has side shoots that are also tasty little curds. They are now starting to appear on my plants now it is early april. For some reason I thought they would appear in June, so I am a little surprised, but I have responded to this event by fertilising them with the little fertilising material I have left.

I have very recently used the last of my compost, so that’s gone, which means I am left with comfrey tea, and comfrey leaves are are only just starting to appear above ground. Once enough leaves have appeared to fill a bucket, it still takes two weeks to brew the tea. On the allotment I am using some comfrey tea I stored from last year in a plastic container, so saving some in the garden at the end of this year for next year would be a good idea, I feel.

I am reduced to using dregs of compost I have lying about in pots and moving some composted mulch from places that aren’t very important to the nine stars which are. 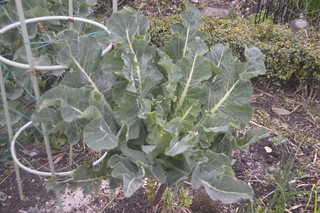 One of the reasons for nine stars importance to me is that it is weighty food. Now that I am recording yields (after heavily criticising permaculture for not doing so) I have noticed the handfuls of such things as chives and salad leaves don’t weigh anything. Well, weigh very small amounts which means if I want to prove that sustainable urban permaculture is effective then I have stop growing things I like to have around and start growing things that weigh large amounts. Like cauli curds, potatoes etc.

In the back yard I am probably going to be relying quite heavily on my two dwarfing pear trees which judging by the amount of blossoms there are on the trees are going to have bumper harvests and therefore add significantly to my kilogram yields. This is a shame because I am personally against permaculture being seen as a tree fruit gardening style. There are however proper veggies being grown (or will be) in the backyard that should make a difference: calabrese, a few potatoes in canvas bags, peas, squashes and beans.

I finally sourced some alexanders (smyrnium olusatrum) as plants, and as shade tolerant hedgerow plants I planted them under the cherry. Along with lovage (which i cant find at the moment), I intend to use these as sustainable alternatives to celery.

Lovage grows easily but is a *very* strong flavour – I like celery but lovage is much too strong for me.

I was told Lovage is a major ingredient in a major brand of stock ‘maggi’ and the fact that it is a perennial peaked my interest. I did find it in the end and grew it through the summer. I have to say I ate it once or twice but didn’t really use it so it probably is out as far as my garden goes.

Easy to grow though. Thanks for commenting John.