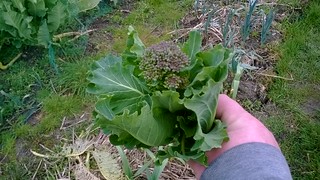 Picked some “broccoli” from the allotment and fried it with an egg. It was nice but it wasn’t strictly speaking a broccoli but the flowering shoot of an Asturian Tree Cabbage which is both good looking and tasty. It is also a perennial and even though it is starting to flower is not showing any of the smaller leaves normally found on flowering brassicas. Like many brassicas it can be kept alive for more than two years by removing all the flowering shoots but the flowering shoots of the Asturian Tree Cabbage are much larger than most brassicas that are not broccolis. I am growing the ATC for its thick cabbage like leaves (though it doesn’t form a head) and the good quality flowering shoots are a real surprise to me. There are other smaller side shoots so I hope to get lots more as the spring progresses. 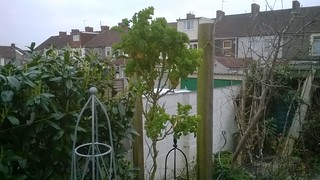 Another brassica I have kept going longer than the alloted two years is the Dwarf Green Curled Kale now 4 years old. It is also six feet tall. It has always been a bit sparse (though has loads of flowering spears each year – though quite small) but I gave it a home made compost mulch last autumn so it looks healthier than last spring. Apart from its taste I am only keeping it alive as an experiment – to see just how many years I can keep a “biennial” alive. It has a hard woody trunk now but still creates more branches that are your more normal fleshy brassica green. I remove all the flowering shoots and eat them like broccoli and it is this I am convinced keeps that plant alive. I am getting bored of this experiment especially as I have better, properly perennial brassicas, so time will tell if I can keep my patience with the thing. I am proud of it, though, and it feels a bit like original research.

Another discovery I have made is that cardboard lain on the ground is a great place for slugs to hang out. I then pick them off and destroy them. This is a handy way to corral them if you have any nearby seedlings you are trying to protect. Worms also like under cardboard.

My overwintered leeks are getting bigger in the mild winter and spring. I planted them, I think, in July and that late they really need spring growing too to get them to a kitchenable size. Around about May they will send up a flower shoot – an event that sounds the end of the leek unless you are propagating – so I am waiting quite late to dig them up. If I wait too late I will have too many to comfortably eat before they all bolt. I also sowed some seed I saved from last year (in December) and it germinated well. They have now grown on and I am about to put them out in a cold frame. I will also sow a second batch directly in the ground soon. The seed I saved was on a seed head that hadn’t matured or gone “crispy” late in September last year. I was not convinced I would get mature seeds but somehow they matured fine in the brown envelope I put the whole seed head in.

Is your Tree Cabbage still going. If so how old is it now? Just wondering what the maximum lifespan can be.

The ‘dwarf’ green curled fell down in the wind two years ago, it’s stalk and branches were never very thick. I now have ‘Taunton Deane’ perennial kale which is about three years old now, 8 feet tall and is very probably the purple tree collard you see on growingyourgreens.com. I also have a less hardy (but not so far killed by frost, just rough looking) African Tree Kale, less hardy daubenton perennial kale, the german ehwiger kohl (like daubenton a bush version) and the flowering but perennial Asturian Tree Cabbage (which is starting to flower now).

I think most kales will live more than 5 years but if the flower spears aren’t removed and the plant is not fed to recharge its energy then your standard from seed kale will easily kick the bucket in spring and summer.